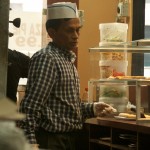 Flushing, Queens — The line stretching out of J.K. Bakery in Union St, Flushing, Queens, reached three doors down from the bagel shop. Inside, the scent of freshly baked onion bagels was enough to make one’s stomach rumble.

Behind the counter, Joon Hee Kim, the son of the Korea-born owner of the shop for the past 20 years, greets the regulars by name and their preferred order in quick Korean. The star of the shop, a classic that doesn’t get old:    the plain.

“Koreans are very cautious with food,” said Kim, handing out the third plain bagel in a row. “Even among customers who have been coming for years, the plain is our best sold bagel.”

The bagel is the most beloved breakfast item in New York – even in Flushing, a predominantly Korean neighborhood.  But as the city’s demographics shift, so do its icons.

J.K. Bakery, a traditional Jewish bagel shop which has been on Union Street for decades, is now owned by the Kim family. The bagels are as iconic as they’ve always been, but the faces behind this bakery’s counter are changing.

New York’s food staples like pizza or bagels cannot be attributed to any demographic group anymore, said City Comptroller John C. Liu, who represented Flushing at City Council from 2001 to 2005 and is a usual customer of J.K. Bakery. “They are a part of New York now,” he said.

J.K. Bakery has become a staple of the eating scenery of Flushing, the hub of the Korean community in New York City for over ten years. Before that it was mainly white and Jewish, as shown by the numbers from the 1960 Census. Since 1965, when the first Korean immigrants started arriving, the area’s Korean population has grown to reach 64,000 according to the 2010 Census. The numbers make Flushing the biggest Korean neighborhood in the U.S.

One of those early arrivals was Kim’s father, who worked odd jobs for a couple of years before starting to work as an apprentice at J.K Bakery, then owned by a Jewish family. Five years later, when the Jewish owner retired, Kim’s father bought the shop.

Twenty-three years later, he still owns the neighborhood hotspot—and still has a hand in how the bagels are made.

“My father tastes the dough every morning to make sure it’s perfect,” said Kim, 28. “No salty or bland bagels are sold here.”

Bagels are not alone in this demographic switch-a-roo – the other quintessential New York bite, the pizza, is experiencing a similar revolution. Pizza by the slice for $1, sometimes less, is still served by many Italians. But in at least one corner of Midtown, pizza slices are dished out by different hands.

“Everybody likes pizza,” said Mohid Kumar, manager of Bombay Pizza, an Indian owned pizza-by-the-slice place on 38th st. and 6th Avenue. “And everybody can make pizza, too.”

Kumar, 49, a Bangladeshi immigrant, has been managing the store for two and a half years. He employs four people, all Hispanic, which sometimes complicates communication just a little bit.  “When they talk among themselves, I have no idea what they’re saying.,” says Kumar, who insists thought that making pizza is team work. “One colleague makes the dough, the other puts in the ingredients, then to the oven. I cut it.”

“Everybody loves pizza. Everybody can make pizza, too.”

In spite of his 16 years in New York, Kumar is not willing to give up in his roots: in the back of Bombay Pizza there is an Indian vegetarian food counter, which includes dosa, an Indian version of pizza. “Many customers change their mind when they come into the store,” said Kumar. “They come for the pizza, and stay for the Indian curries.”

The popularity of pizza and bagels in New York City date back to early 20th Century, when Jews from Eastern Europe and Italians were the two major immigrant groups in New York. This combined with the abundance of wheat made it easy for both bread-based products to spread.

“The particular demographics of New York brought bagels and pizza to other groups who would otherwise never have tried them,” said New York-based food writer Frederick Kaufman. “What is happening today is one step further in the fusion of cuisines.”

As deeply engraved into New York’s history as they are, these food staples must not be altered, at least anymore than necessary: Kim and his father adhere to that philosophy.

“We don’t toast bagels here, sorry,” says Woo Hee Kim – Kim’s aunt who also helps at the shop – to a customer who requested it be done to her bagel. “We don’t even own a toaster,” continues Kim. “Bagels are not traditionally toasted, so we don’t do it.”

Old habits die hard though, even when mastering the art of making a bagel. Kim, who was born in the States, does take daily advantage of the treats of his shop; his father, on the other hand, starts the day the Korean way: with a dish of rice, seaweed and soup.

“Koreans are still dazzled by the idea of bagels,” said Kim. He said that a couple of years ago, his father tried to open a bagel shop in Seoul, but ended up returning to New York when the business did not prosper.

Apparently though, the Korean population is actually opening up to new cuisines.

“We hear that Mexican food is all the rage now,” said Kim. “So who knows, maybe bagels will be the next thing! And then we can try again.”