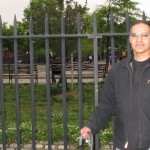 Bushwick, Brooklyn — Some New Yorkers, like Robert Camacho, never venture far from the neighborhoods they knew as a child.

Camacho, 51, went to the same elementary school as his mother, P.S. 26, on Lafayette and Reid Street.  He still lives on Stanhope Street, in the home of his father, who passed away in 2001. He has lived in Bushwick and Bedford Stuyvesant, the neighborhood that borders it, since he was a toddler and has no plans to leave

Camacho feels a strong emotional connection to his neighborhood, as many long-time residents in other neighborhoods do.  Recently, however, Camacho has come to feel like an outsider.

If you ask Camacho what makes the area so special, he’ll say it was the closeness among neighbors. When he’d see someone on the streets, they were almost family. He knew their parents, their brothers, sisters and grandparents. “They stay in your house, you stay in theirs,” Camacho said.  “Any food, they feed you.”

This feeling of community was important to a boy growing up without much family support. Camacho’s mother left when he was two.  At that time his father was only making $60 dollars a week. “There was nine of us. So it was rough,” he said. For a time Camacho’s uncle and his aunt helped raise him and two of his siblings.  Then when his father remarried, all three children were reunited with his father. His father’s new wife was 15-years old.  She became a mother of nine overnight.

As if his family situation were not tough enough, Bushwick had its own share of troubles. In the late 60s and early 70s the friction between Latinos and African Americans in Bushwick was well-documented. Camacho’s elementary school, P.S. 26, was mostly African American and as one of the few Puerto Ricans in his school Camacho was teased a lot.  He got into fistfights and knife fights. The right side of his stomach still bears faded red scars from the time he was stabbed on a playground.

At school there was one boy, Butch, an African American, who Camacho said he fought every day. Any time they saw each other in parks and grocery stores,  punches flew.

“It was something like a hate thing,” Camacho said, “That thing was in me and it was in him.”

Camacho formed a “crew” with his friends. They called themselves the Kosiuszko Boys or KB for short, Kosiuszko was the name of the block his family had moved to. They carried guns and knives. “We made sure that who ever came in there, nothing was going to happen,” he said.

When Camacho was 16, he left home and the following year his stepmother signed him out of high school.  He lived in a nearby apartment building on Bushwick Avenue with his girlfriend and worked as a building super.  The couple had two children, but eventually broke up HOW MANY YEARS LATER.

Then WHEN?  he met Joanne,  his current wife,  and had two more children.  Unlike his own parents, Camacho promised he would treat his children equally and show them the kind of affection he never received.

Today, the anger Camacho felt for certan individuals is long extinguished.  As for Butch, the boy he fought everyday, “I see him now and we’re like the best friends,” Camacho laughs. “Are you kidding me? He gives me a hug and a kiss. “

Camacho’s hardscrabble coming of age mirrors the stormy evolution of his neighborhood, a farming village turned factory town. The town was  settled mostly by Dutch and Swedish and Norwegian immigrants in the mid-1600s. But by the 1830’s, the neighborhood had transformed into a factory town—replete with distilleries, refineries and warehouses—and a shipping yard. Germans and Italians filtered in.  In the 1960s an influx of low-income Puerto Rican and African American led to the “white flight” typical of that era.  Speculators bought low and sold high to the minority newcomers, many of whom defaulted.

In the early 1970s, the government withdrew its financial support to  the neighborhood shuttering social agencies and closing many of its firehouses.  Riots erupted in the streets, gangs flourished, and murders happened in broad daylight. Bushwick was crumbling.

“Nobody wanted to live in Bushwick,” said Camacho. “The city was giving land for a dollar and homes for a dollar, and you had a year to take care of it and people still wasn’t buying.”

Beginning in the late 1990s, Mayor Koch introduced major reforms that saw crimes rates drop and pushed Bushwick forward on its path to economic recovery. Today, Bushwick has turned around—and longtime residents, like Camacho, are trying to adjust.  There are more coffee shops, more bars, a thriving art scene and more urban professionals than in years past. “Now everybody’s flocking to Bushwick. You see new homes, new houses and they pushing us out,” he said. The number of non-Hispanic Whites has tripled in the last decade, growing from approximately 3,000 to 9,500. The average one-bedroom rental costs about $1400, which is out of range for many long-time residents.

When Camacho walks down the street he still pictures the neighborhood as it was. He remembers which houses sold drugs, where drops were made, and the best places to hide overnight, after the police broke up a fight.

“Everybody was saying that Bushwick was no good and Bushwick was terrible; a lot of drugs, a lot of gangs,” said Camacho. “You had good people there. You had people that care about each other.” The storeowners he knew have left, and the dynamic between him and his new neighbors is awkward.  “Sometimes when you do talk to them they think something’s wrong or you want something. They’re all to themselves,” he said. “It’s the transition.”